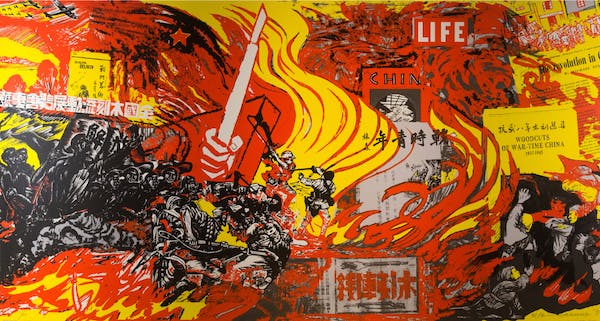 Exhibition opens at the Museum of East Asian Art in Bath

The exhibition showcases a series of prints selected from Muban Educational Trust’s collection of over 6,000 and tells the story of China’s twentieth-century wars, revolution and rejuvenation.

The exhibition explores artistic trends, political movements and technical developments in modern Chinese printmaking. The works presented mark several significant anniversaries in China’s modern history, including the May Fourth Movement (1919), the founding of the Chinese Communist Party (1921), and Lu Xun’s (鲁迅) seminal printmaking class, which symbolises the origin of the Modern Woodcut Movement (1931).

Included in the exhibition, and for the first time ever being shown in the UK, are eight prints and some blocks from a portfolio of 18 contemporary Chinese prints, commissioned by the MET from some of China’s most accomplished young printmakers today. These prints represent a milestone in the modern revival of the relief print in China and in the development of the nation’s contemporary printmaking practice.

This exhibition is curated by Mary Ginsberg.

More about modern Chinese printmaking and revolution in video: A Revolution in Art (2003) by Francis Gerard